We have been treated to some wonderful wildlife encounters this year– from the rare to the remarkable and downright bizarre. As 2018 draws to a close we look back on our top ten spots of the year. 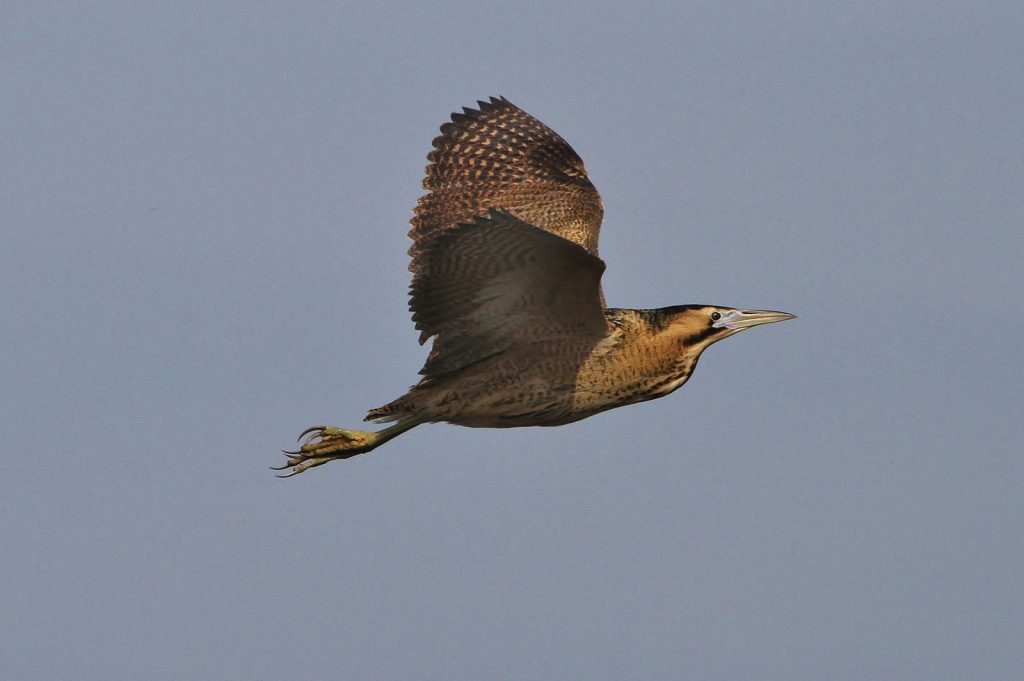 Our most booming marvellous spot of the year came when a Bittern flew inches above the heads of passengers on the top deck of the Cordon Rouge on Horning Reach this October.

The Bittern is one of the rarest and most iconic species on the Broads.  Their elusive nature and excellent camouflage mean that they are only occasionally glimpsed among the reed beds (although the males are more often heard booming to attract a mate).  So, imagine our excitement when one almost skimmed over our heads!

2) Kayaking Otter Enjoys a Picnic at the Wroxham Regatta 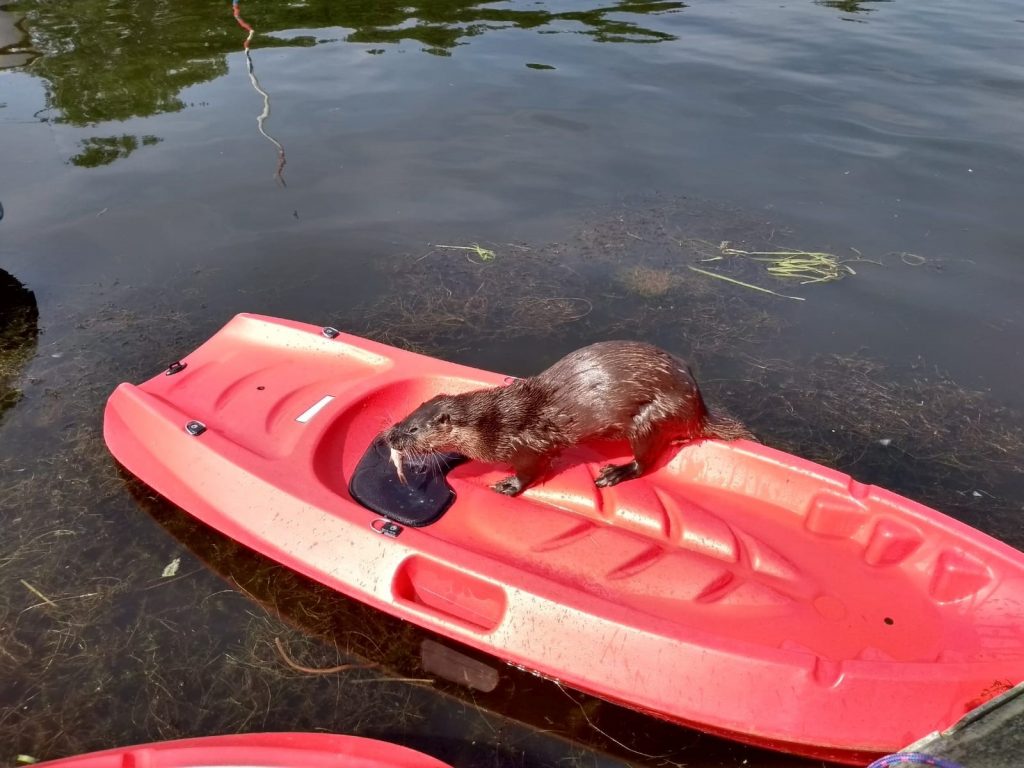 Spotting an otter climbing onto a kayak to eat a fish amongst the noise and medley of Wroxham Regatta sounds like a fishy tale…Fortunately we have the photograph to prove it (taken by one of the competitors, Hilary Franzen)!

We have had many other remarkable encounters with otters including one swimming in front of our trip boat carrying a huge pike in its mouth that was the size of the otter!

But perhaps the biggest surprise came when a very large dog otter slid out of the water and stood behind crew member Donna, while over 100 people were boarding the Queen of the Broads.

3) Swallowtail Butterfly Lands on the Queen of the Broads 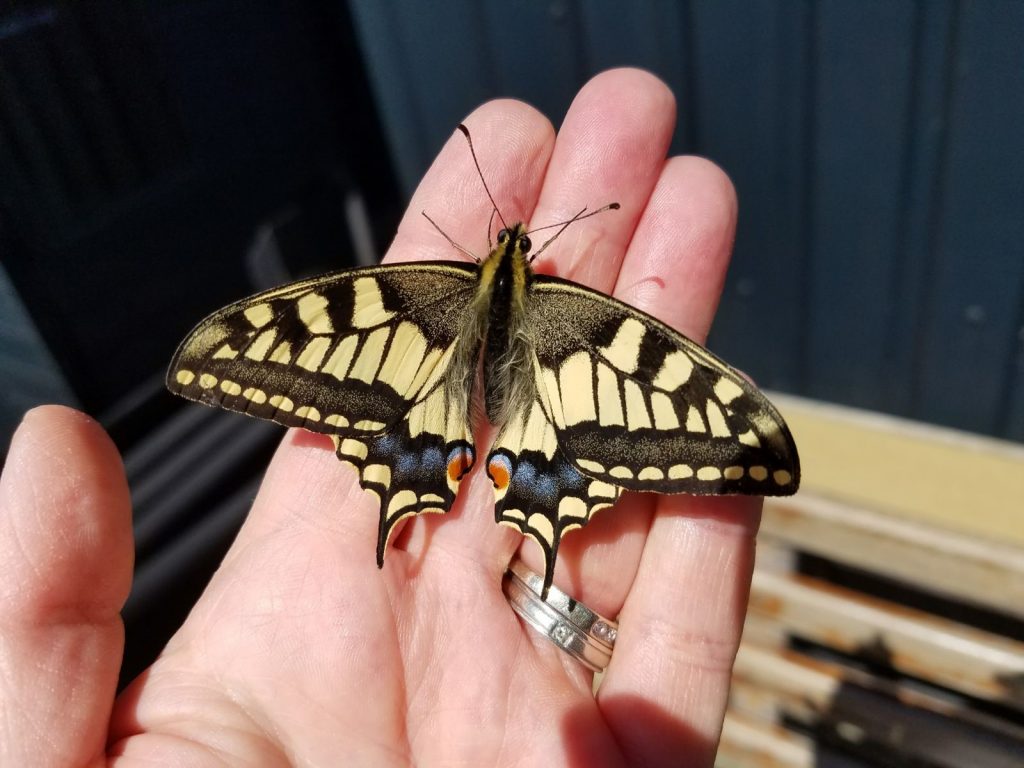 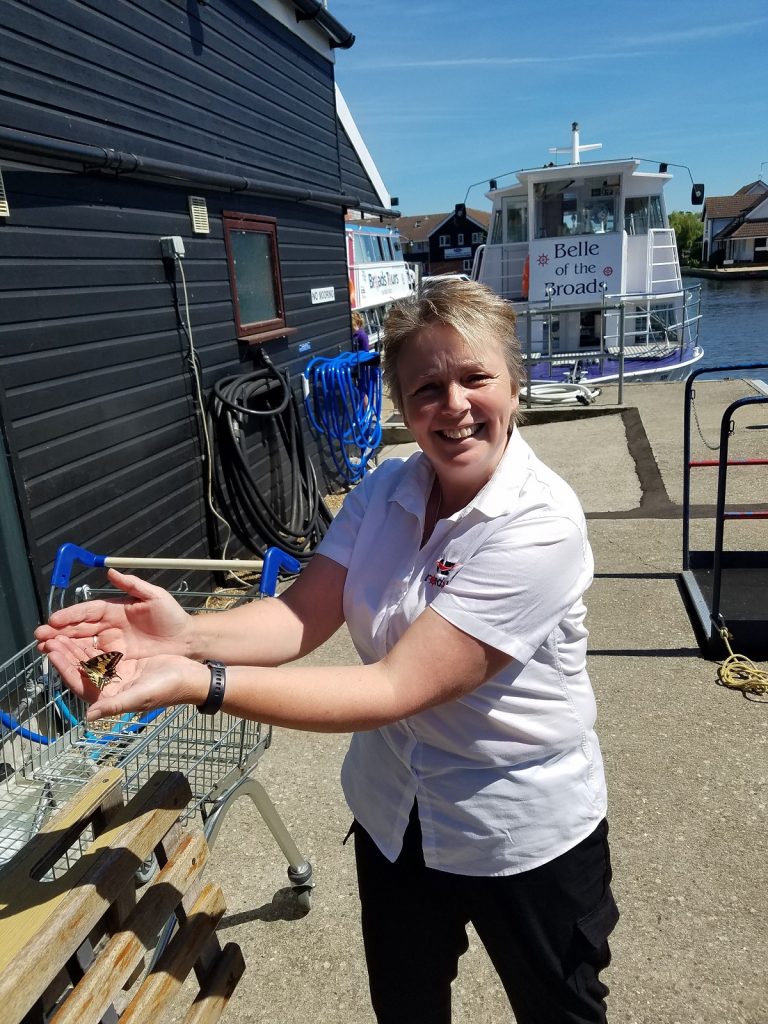 The Swallowtail butterfly – is not only Britain’s largest butterfly but a Norfolk icon as it is only found in our fine county.  Spotting these rare creatures, even in the wildest Broadland reedbeds is a very special moment to be savoured.

So when a Swallowtail landed on the back deck of the Queen of the Broads while we were boarding passengers in our boat basin we were frankly astounded!

Our crew member Donna, helped the Swallowtail to a quieter spot in the sunshine, where we were able to take this picture to prove our unlikely tale!

4) Marsh Harrier about to Enjoy Lunch 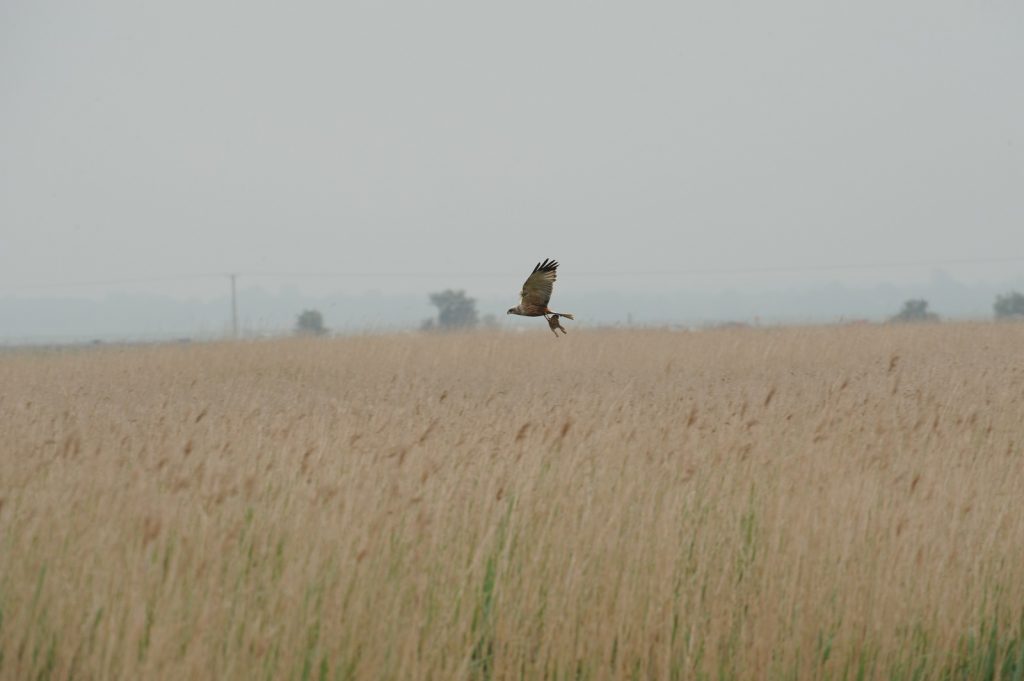 Spotting a marsh harrier soaring over reedbeds is becoming an increasingly common sight.  But taking a good photograph of the bird in flight is a rather more difficult challenge.

So we were really impressed when a customer sent this terrific photograph of a marsh harrier carrying a rabbit in its talons that they took while on holiday with us!

5) Family of Kingfishers on one Branch 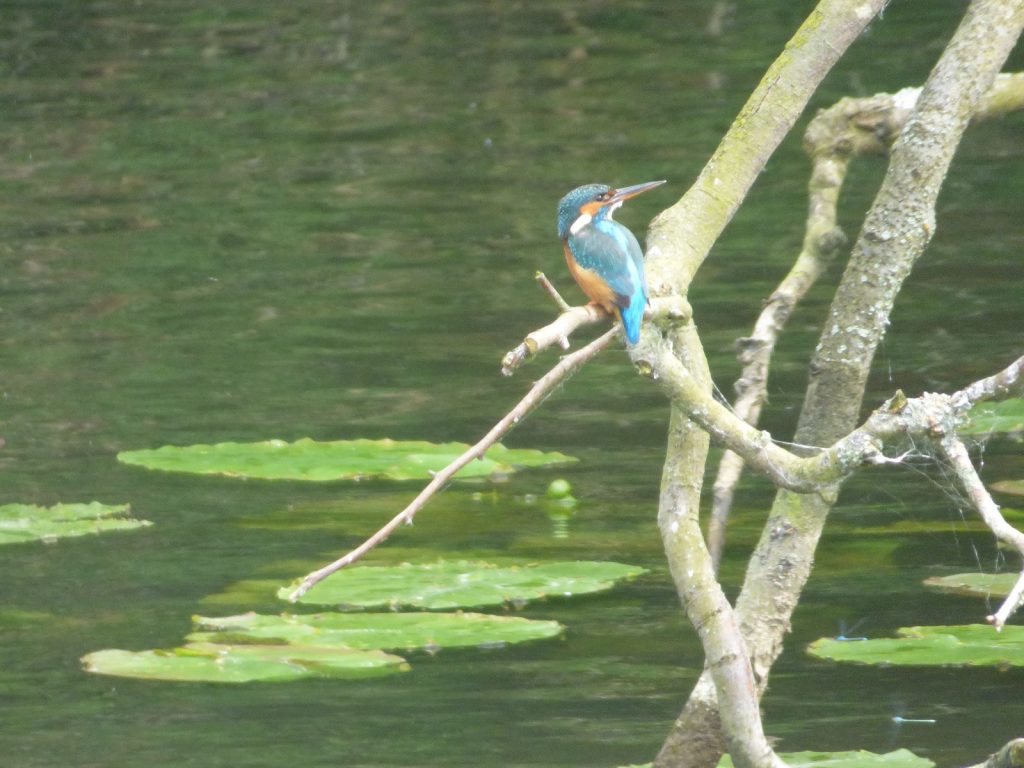 A pair of kingfishers reared their young near Salhouse Broad this spring and the whole family could often be seen perching together on a fallen tree and using it as a diving platform to catch fish!

Kingfishers are very shy, but for these few weeks of the year they seemed to tolerate us watching them fishing from the branch without flying away. 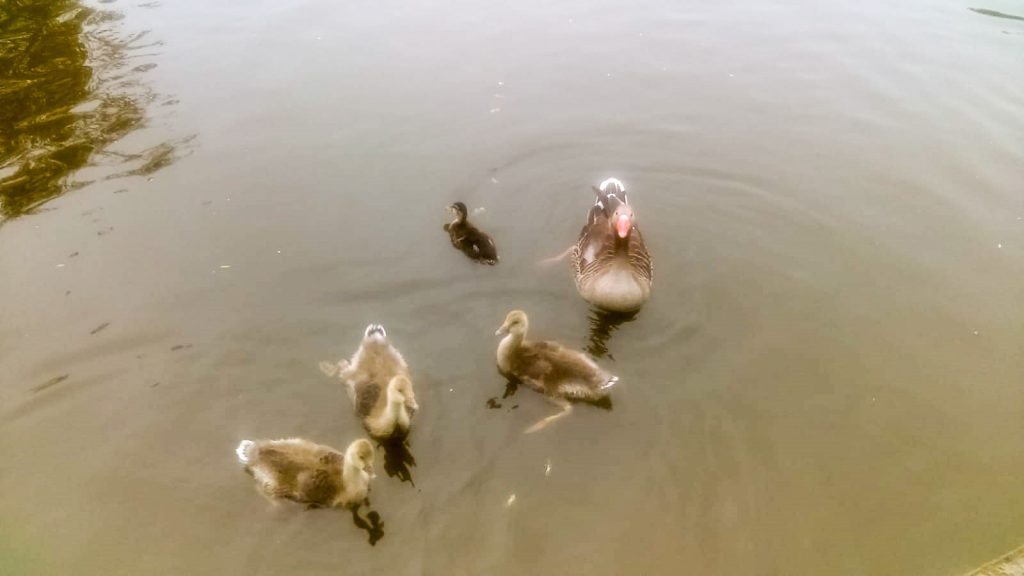 First prize for amusing spots goes to this duckling, which was raised by greylag geese at Irstead Staithe near Barton Broad this spring.  The mother goose seemed quite unaware that the duckling wasn’t one of her own goslings despite the size difference!

7) Coots on the Comeback 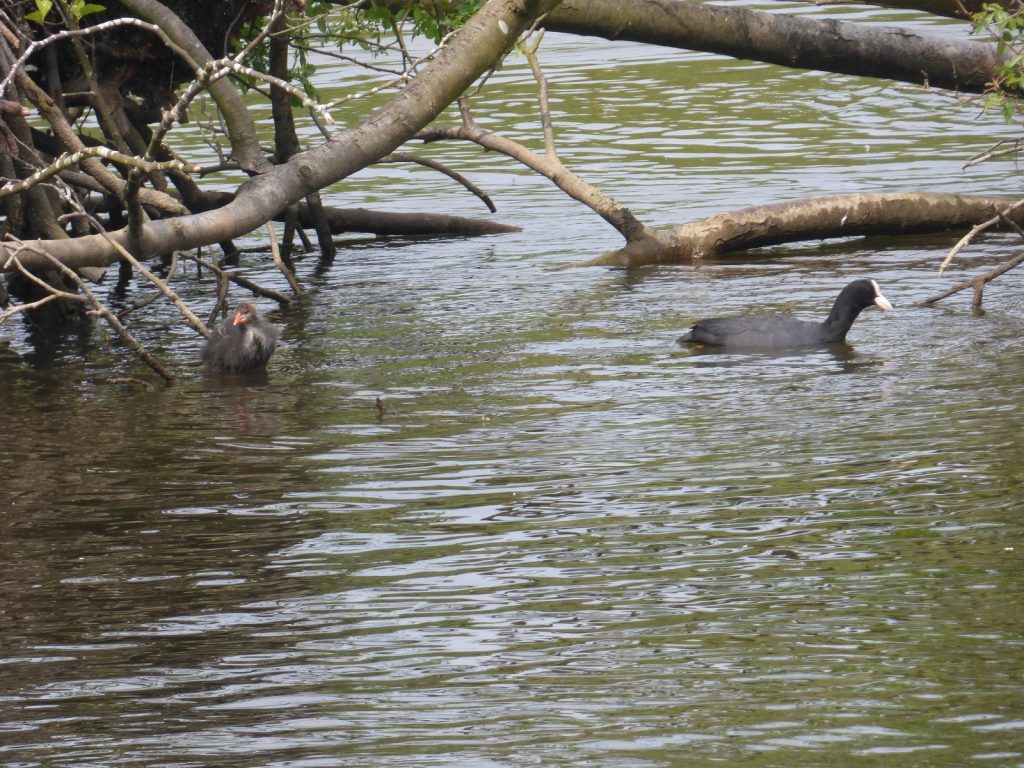 The birds made famous by the Swallows and Amazons book ‘Coot Club’ used to be a very common sight on the Broads.  Sadly, the population of Coots crashed a few years ago but we are very pleased to report that their numbers began to recover again in 2018. We particularly enjoyed watching Coots successfully rearing their ‘Cootlings’ on Salhouse Broad.

8) Surprise Appearance from a Mandarin Duck 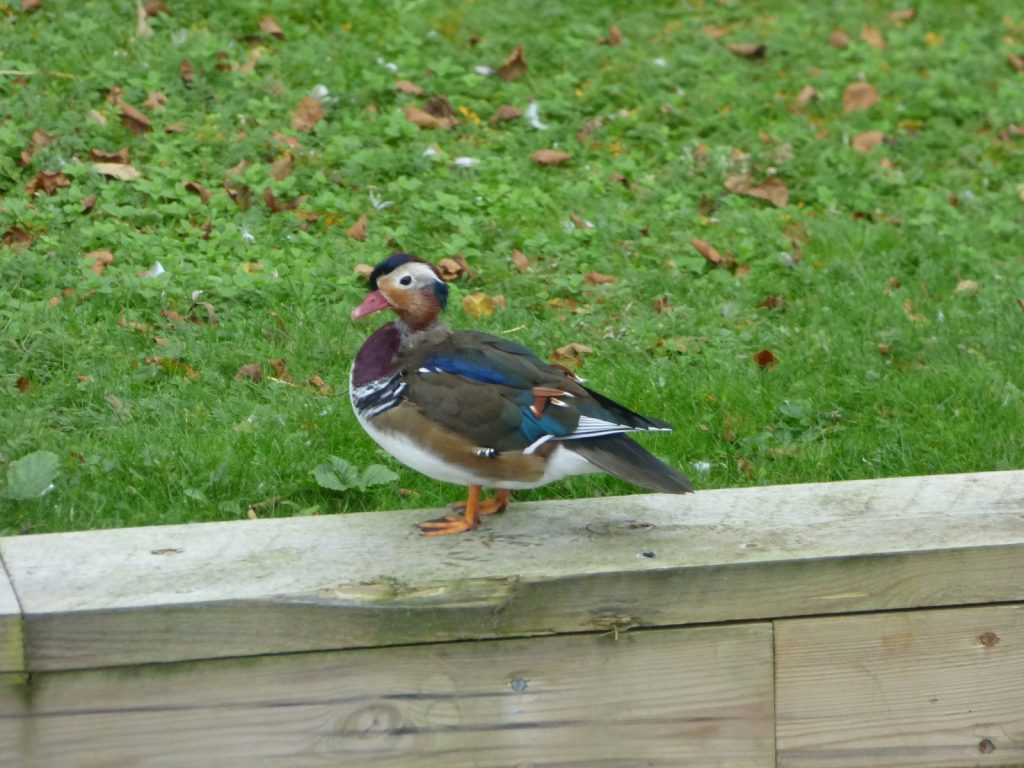 We had an unusual visitor to Wroxham Village this summer.   This very colourful mandarin duck appeared in the gardens for a few weeks before disappearing as mysteriously as it had arrived. The birds were introduced as an ornamental duck from China but a few escaped and are beginning to become established in the wild. 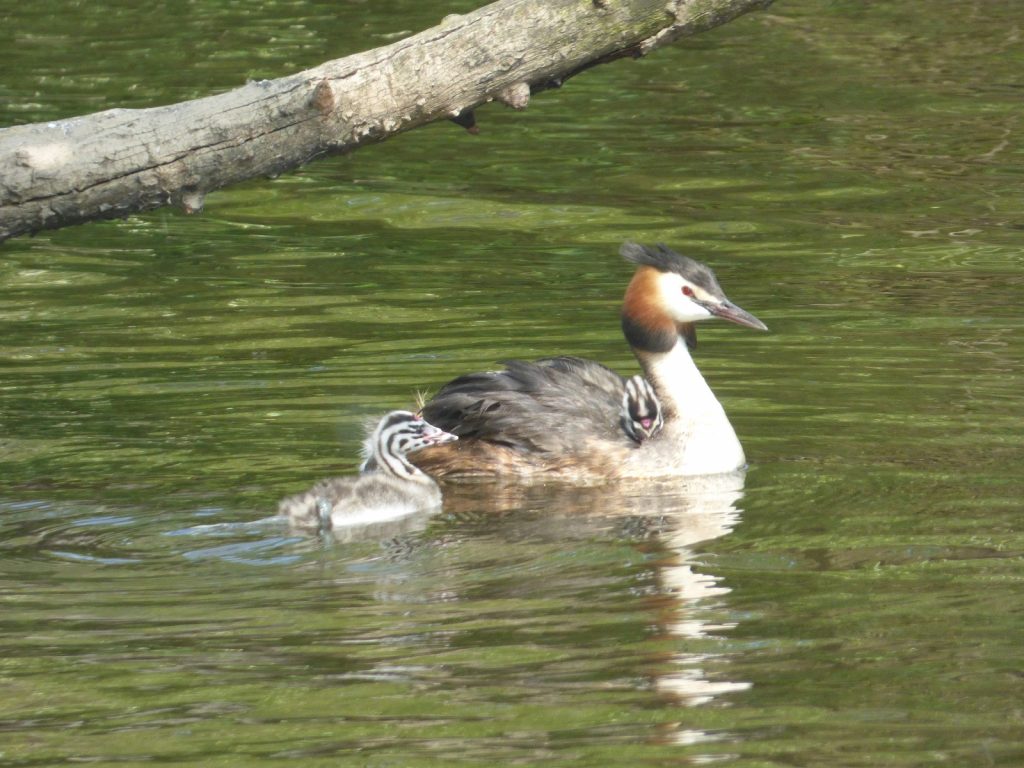 Spring 2018 was an excellent time to watch lots of pairs of Great Crested Grebes building their floating nests along the water’s edge – particularly on Salhouse Broad.  Better still when the eggs hatched there was plenty of opportunities to watch them carry their young greblets on their backs! 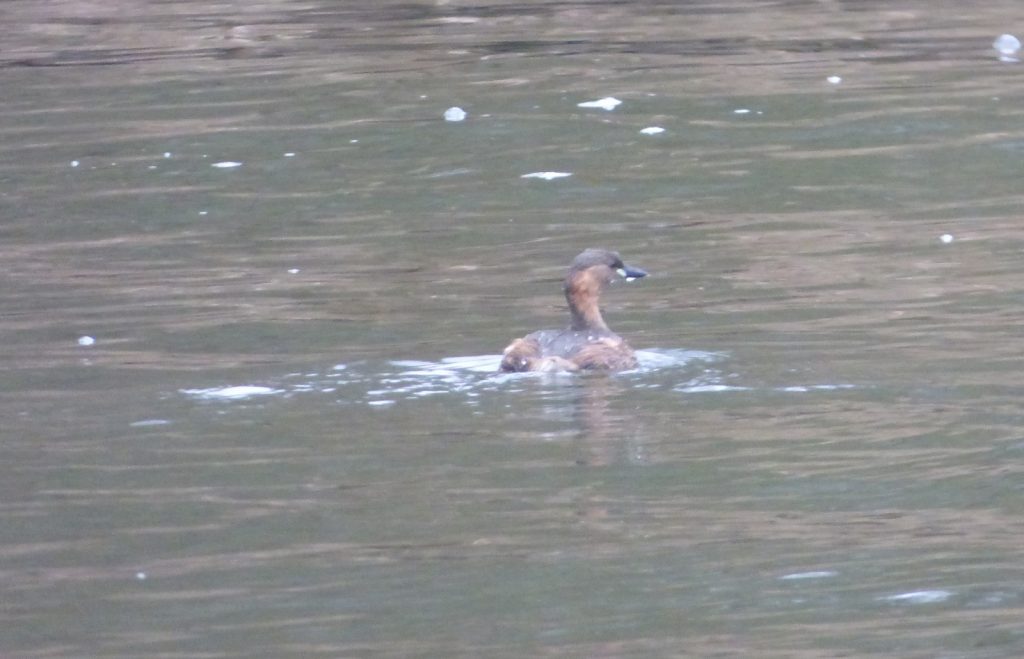 While spring is the most delightful time of year to watch Great Crested Grebes this winter has offered some excellent sightings of Little Grebes, particularly on the S bend just downstream of Wroxham Broad.  These shy little bids, sometimes called ‘dabchicks’ due to their small fluffy appearance, only venture out into the open when the river traffic starts to die down. 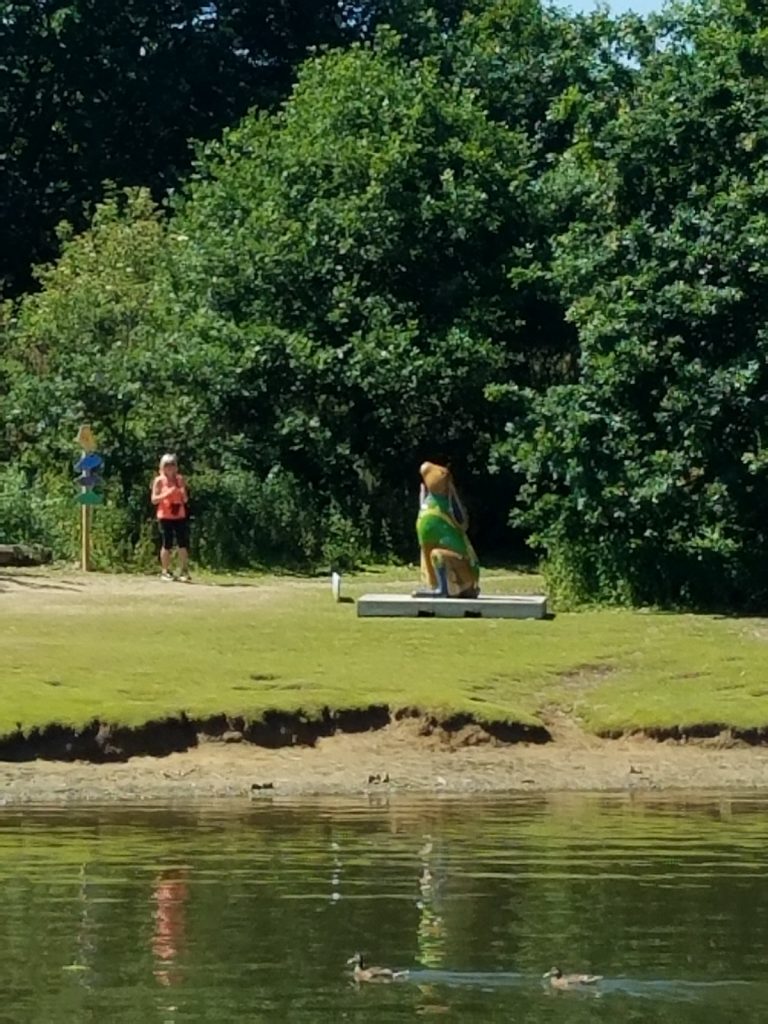 While not strictly wildlife, this GoGo Hare – Warden Willow – made quite an appearance at Salhouse Broad this summer as part of the GoGo Hares charity art trail.
The hare sailed on the back of a wherry from Wroxham to Salhouse Broad and spent the summer by Salhouse Beach attracting thousands of visitors!